Oyster Mushrooms have two true species that predominate in central Maine but can easily be grown at home with mushroom kits and mushroom logs. Up until recently I thought there was only one since prevailing wisdom said Pleurotus ostreatus could have a white or lilac/lavender spore print. A few years back we used to call the lavender spored variety Pleurotus sapidus but no more. That epithet has apparently been “deprecated”. The taxonomy of these is still in flux. These are more of a complex. Pleurotus ostreatus grows in the fall to early winter. The almost identical Pleurotus populinus, a recently described species, grows in late spring and occasionally throughout the season on poplar/aspen. 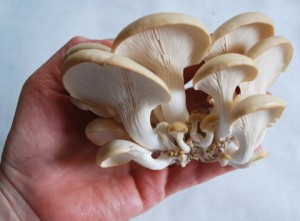 Before Pleurotus populinus was defined as a distinct species, it was considered a spring P. ostreatus with a white spore print. Now the fall oyster previously known as Pleurotus sapidus is known as the “true” P. ostreatus. It generally has a lavender/lilac spore print if allowed to develop any thickness. These species are good edibles with medicinal properties. There are several other species of “oysters” that may appear sporadically.

Cap (pileus) 1 – 12 inches wide, 1/2 to 1 1/2 inches thick. Convex and semicircular to fan shaped, overlapping in large bunches. Either species usually has a strong anise-like aroma. Older fruit bodies may develop some off aromas. Pleurotus ostreatus cap color is likely to be tan to brown but can be whitish, grayish or even gray-blue. The gray-blue color is more likely to be seen in cultivated P. ostreatus of European origin. Pleurotus populinus has a whitish ivory cap.

Oyster Mushroom Gills (lamellae) Fairly close together running down the stem and white, light gray or tannish. Pleurotus populinus is likely to be whitish ivory. P. ostreatus will have more variation in color being usually tan to brown.

Oyster Mushroom Stem (stipe) Usually nonexistent to stubby unless growing on top of a log and bunched together (cespitose). 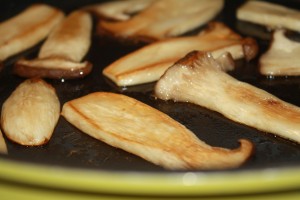 When and where to find them (ecology) Pleurotus populinus is mostly found in late May and early June growing on dead poplar (aspen) exclusively. I find them on both quaking aspen and eastern cottonwood. They may appear sporadically throughout the summer especially after a heavy rain. I have not found them on a living tree but it is probably possible. They have a strongly anise/almond aroma.

Pleurotus ostreatus is found from mid Fall to mid December and seems to prefer sugar maple and occasionally beech, or other hardwoods. These are likely to be on living mature trees with obvious signs they are on the way out or occasionally on dead wood. They can be very high in the tree and grow in enormous numbers. They can be harvested year round in the produce section of most supermarkets like whole foods.

The king oyster mushroom is low in calories and high in protein. Fresh mushrooms contain 3 percent to 21 percent carbohydrates and 3 percent to 35 percent dietary fiber on a dry-weight basis. Mushrooms also contain a number of essential minerals such as phosphorous, potassium, calcium and iron. They are also an excellent source of thiamin, riboflavin, niacin, biotin and ascorbic acid. Find out more about mushroom nutrition.

How to Prepare Oyster Mushrooms