The portobello mushroom is a large brown strain of the same fungus, left to mature and take on a broader, more open shape before picking. Portobello mushrooms are distinguished by their large size, thick cap and stem, and a distinctive musky smell. 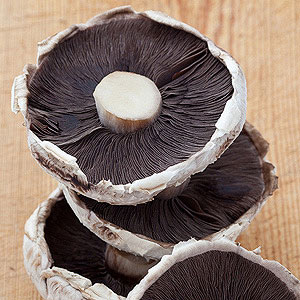 Portobello mushrooms are rich flavored, meaty textured, an has a large, flat, dark brown cap that grows up to 5 inches in diameter when mature. Beneath the cap, dark gills give this mushroom a distinctive appearance for identification. Also known by its scientific name, agaricus bisporus, this mushroom is delicious when grilled, broiled, or sautéed, providing a somewhat smokey or earthy flavor. When it is not fully grown, Portobello mushrooms are picked as a white round, button-shaped mushroom and referred to as Crimini, Bella or Baby Bella. As it matures, the mushroom cap and gills turn tan to dark brown and the cap becomes flat and broad in shape.

Mushrooms, being fungi, do not grow like a regular garden vegetable. They are generated from spores, not seeds. They contain no chlorophyll. When growing, their nutrients are delivered from the medium they are grown in and absorbed through the root system supporting the mushroom, which is called the mycelium.

If you are interested in growing your own portobello mushrooms, you can order kits that contain pre-inoculated media or that require you to do the inoculation yourself. There are many sources available online – a simple Google search for mushroom growing kits will lead to many vendors. The kits range from the low end box of mycelium and medium for indoor growing (about $30 – $40), to much higher end (and more complicated) “systems” that enable you to inoculate your own substrate, for anywhere between $300 and $500. 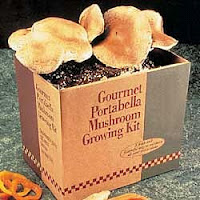 A look at the low end kit demonstrates the general growing process. After receiving your kit, you must maintain a proper temperature and moisture level throughout the incubation period that is required for the mycelium to colonize the substrate. This process usually takes a week to ten days. The next step is to force the fruiting of the mycelium by keeping the kit moist and, in the case of Portobellos, dark. (The requirement for darkness, often thought to be common to all mushrooms, is actually unique to Portobellos and their relatives the White and Crimini mushroom. Other varieties, like Shiitake and Oyster mushrooms, require some light.)
Most kits have a tent to retain moisture, but you do need to spray regularly. And you need to use the right kind of water – chlorine is a no-no, so if you must use tap water, you need to let it sit overnight so the chlorine can evaporate.

Most kits produce mushrooms within a couple of weeks. Each harvest is called a flush and you can expect about two or three flushes per kit. Portobello kits yield about 3-6 pounds of mushrooms over three months.
The Pharaohs prized mushrooms as a delicacy, and the Greeks believed that mushrooms provided strength for warriors in battle. The Romans regarded mushrooms as a gift from God and served them only on festive occasions, while the Chinese treasured them as a health food.

Today, mushrooms are enjoyed for their flavor and texture. They can impart their own flavor to food or take on the flavor of other ingredients. Their flavor normally intensifies during cooking, and their texture holds up well to usual cooking methods, including stir-frying and sauteing.

It is popular to add mushrooms to soups, salads, and sandwiches, or to use them as an appetizer. They also add an appealing touch to vegetable-based casseroles and stews. In the US, mushroom extracts are increasingly being used in nutraceutical products and sports drinks.