The common white cap mushroom, which is often called the cultivated mushroom even though so many “wild” ones are now being cultivated, has been around for a long time. White Mushrooms have been bred to be uniform and, in many cases, very white. California and Michigan are big producers, but Pennsylvania grows about 50 percent of what’s on the American market. They are raised in cellars, caves, special constructed mushroom houses – even n abandoned mines. 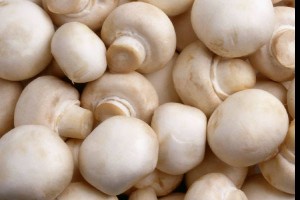 The perfect white mushroom is white, firm, and dry to the touch, with no sticky or tacky feel. Some varieties have a tan tinge or slight scale, so a white-white color is not always the key indicator of freshness. A closed cap is when you turn a button mushroom over, the underside of the cap should be attached to the stem by a thin veil of flesh. Caps that have opened to reveal the dark gills underneath show age. Button mushrooms start to open after three or four days, after a couple more days, they are fully opened, discolored, and starting to get sticky.

Simply handling white mushrooms makes them discolor. That’s why white mushrooms are often packaged in small cello-packs. Larger quantities are often sold in three-pound wooden baskets or lugs. These should be bought only when you know you’ll be using them quickly. Button mushrooms refrigerate well, but wrap them in paper towels. Like other mushrooms, they should never be immersed in water when cleaned.

The white mushroom has a special carbohydrate that stokes the metabolic fire and maintains blood sugar levels. A strong metabolism means more burned fat. Three ounces per day for four to six weeks has been said to yield substantial weight loss (this does not mean that exercise and healthy eating is not required). These mushrooms are also high in selenium which not only aids weight loss but is showing to have positive effects on prostate cancer. Learn more about the health benefits of mushrooms.

How to Saute White Mushrooms